Regular and Planar Graphs
Graph could be defined in various ways. One of the definitions connects graph to the notion of binary relations: Let X be non-empty set and q a binary relation within X. The ordered pair G=(X,q) is graph in which elements of the set X are called vertices and the elements of the set q are edges.
A specific property of the graph is a possibility to be presented on a plane where the vertices x1, x2, x3… xn are represented as points and edges as lines. When vertices x1 and x2 belong to a single edge q, then the point that marks vortex x1 is connected by a line with the point that represents vortex x2. This line, together with the points x1 and x2, is a graphic representation of the edge q. If x1 and x2 do not belong to the same edge, then they are not directly connected with a line.
Two graphs are isomorphic if there is biunivoque correspondence between the sets of their vertices in a way that maintains the same neighborhood relationships. On the Fig.1 three graphs are shown, each with four vertices and four edges. Graph 1a consists of one vortex of the third degree (r=3), two vertices of the second degree (r=2) and one vortex of the first degree (r=1), while in the graphs 1b and 1c all the vertices are of the same degree r=2.

Fig.3
We could notice that 3a can be presented on a plane where all the edges meet in the vertices only, while graph 3b can not be presented this way. Here there is at least one (crossing) point between two edges that doesn’t belong/correspond to the set of vertices. Based on this property all the graphs could be grouped in two classes: planar and non-planar graphs. In planar graphs all the edges meet only in the vertices. This graph divides a plane in finite enclosed parts and one that is infinite. This property of planar graphs is a bases for the well known Euler’s theorem.
Theorem 2: Connected planar graph with n number of vertices and m edges divides a plane in f=m-n+2 areas.
Proof is inductive based on the number of edges. Minimal number of edges in the graph with n vertices is m=n-1. In this case graph is represented as a tree which doesn’t define any encircled area (contour) f=1, meaning that the Euler’s theorem is valid for m=n-1.
If a graph G has m edges and if f is a number of areas G (m>n-1) then graph has at least one contour. Lets assume that Euler’s formula is valid for the graphs with m-1 edges. If an edge belongs to a contour in a graph G it is also a dividing line between two areas. If we remove this edge from the graph we will have graph G1 with m-1 edges and f-1 areas, since the number of edges and areas is reduced for 1. In that case f-1= (m-1)-n+2, meaning that in a graph with m edges, number of areas is f=m-n+2.

Representation of graphs on a plane
As it was already shown a certain graph could be represented in various ways. This is why it would be useful to define some rules based on the graph’s properties that would determine its representation.

Fig.5
For the planar graphs the first rule is that this property (planarity) is visible. In Fig.5 is shown a certain planar graph in its planar (5b) and non-planar (5a) representations. We will always represent this graph in its planar version (5b). Second rule is based on the length of the longest contour. A graph will be represented in the way that its longest contour is its outer line, but first satisfying the rule of planar representation. This is why, in spite of the longer outer contour, the 5a version is not acceptable.

Fig.6
On the Fig.6 is a planar graph with n=6 and r=3 in two ways. Since both versions are satisfying the condition of planar representation we will accept version with the longer outer contour (Fig.6b).The third rule for representing planar graphs will be symmetry. Between two representations of the same graph (Fig.7) we will select 7b.

–Graph of the degree r=0 consists only of one vortex and has no edges (q=0).

Fig.8
–Graph of the degree r=2 is called a contour. Minimal graph of this degree consists of three vertices (n=3) and three edges q=3 (Fig.9). 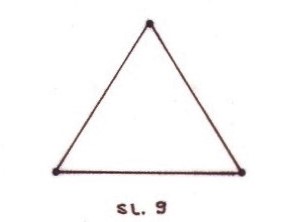 Fig.9
Beginning with this simplest case, by adding one vortex and one edge at the time, it is possible to generate graphs with 4, 5, 6,.., n vertices(Fig. 10).

Any two graphs of this type with the same number of edges are isomorphic. In other words, for a certain number of vertices there is only one corresponding graph of this type. In that sense, graphs 1b and 1c are isomorphic (being regular, with four vertices, each with degree r=2). All graphs of this kind divide the plane in two areas regardless of the number of vertices (f=m-n +2=2) and each has its planar representation.

Fig.12
In fact, two planar graphs are isomorphic only if all the corresponding areas (cells) in both graphs have the same neighboring areas (cells). We could also notice that two representations of the same graph could define two different divisions of the plane (Fig.13, 14).

Based on the graphic presentation of a planar graph G it is possible to define its (geometric) dual, a graph G* which vertices correspond to the cells of the graph G. Here to each cell in G, including infinite, correspond one vortex in G*. Thus, two neighboring cells in G have corresponding neighboring vertices in G*, which indicates that the edges in G* are defined by the neighborhoods of cells in G. In the fig.15 are presented two graphs that are dual to those shown in Fig.13. 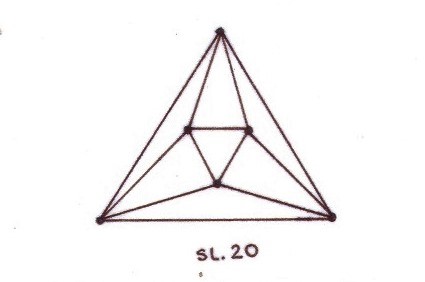 –Graphs of the degree r=5
Following the methods for enlargements of the graphs r=4 it is possible to establish similar procedure for generating regular and planar graphs of the degree r=5 that is based on its minimal case (Fig.26) which consists of 12 vertices and all its cells are triangular. 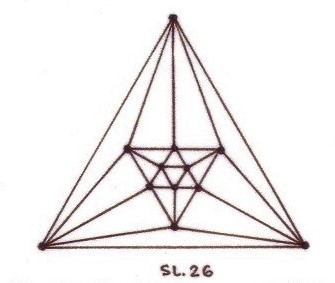 In the Fig. 27-31 are given some methods for enlargement of the minimal graph while maintaining its basic properties. Although it is uncertain if all these operations are complete and independent we could assume that there is a finite set of independent operations that could generate all the regular and planar graphs of the degree r=5 based on the minimal graph shown in Fig.26. 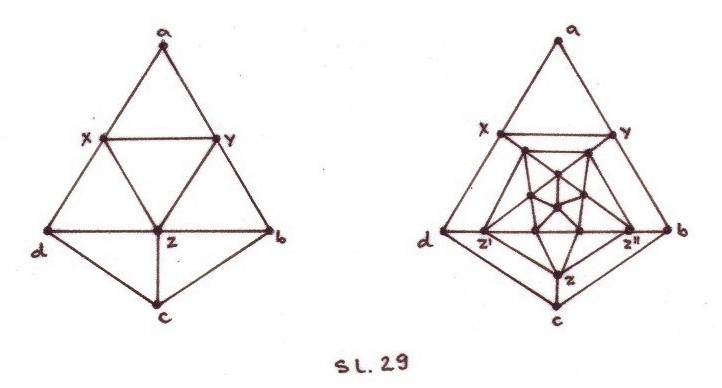 –Planar graphs and spatial structures
If there is a finite set X=x1,x2,x3,x4,x5, and if there are between its elements defined neighborhood relationships in this way: x1qx2, x1qx4, x2qx3, x2qx4, x3qx4, x4qx5 that can be represented with the graph shown in Fig32.

In order to avoid this multiplicity, we will choose the square-like shape in Fig.34 to be the standard shape for the spatial structure (Fig36).

Let compare the neighborhood relationships between the elements of the spatial strictures in Fig. 37.
We will notice that they all correspond to the same graph shown in Fig.32, which indicates that all these spatial structures are isomorphic. While their neighborhoods are the same, the elements of these structures differ in their sizes, shapes and positions they occupy within a structure, indicating that the sets which are defining these structures are not the same.

*) This work was submitted as a diploma paper at the Belgrade University in May 1980.
Goran Đorđević

Appendix I
Here are presented 14 planar and regular graphs of the degree r=3 with number of vertices n=4,6,8 and 10, according to these rules:
-graph has to be visibly planar
-outer contour is a the longest cell in the graph
-symmetry

Appendix II
Here are presented 32 planar and regular graphs of the degree r=3 with number of vertices n=12 according to these rules:
-graph has to be visibly planar
-outer contour is a the longest cell in the graph
-symmetry 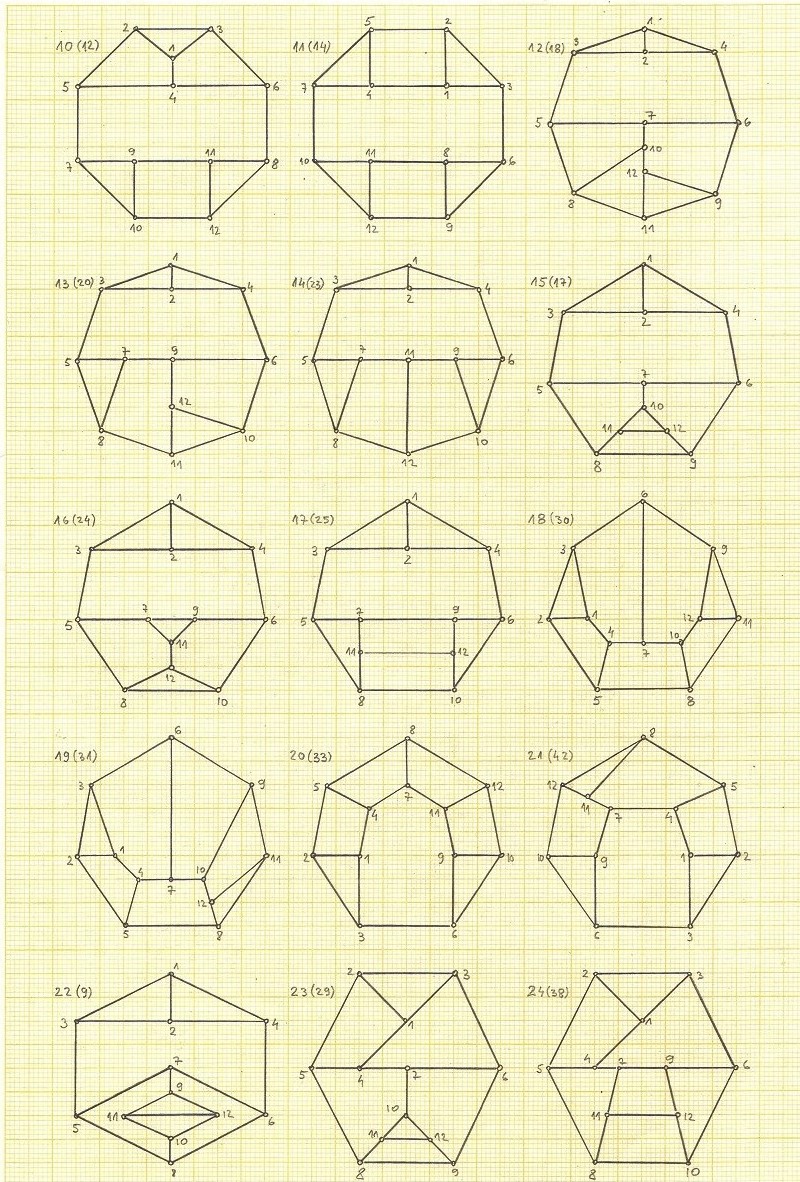 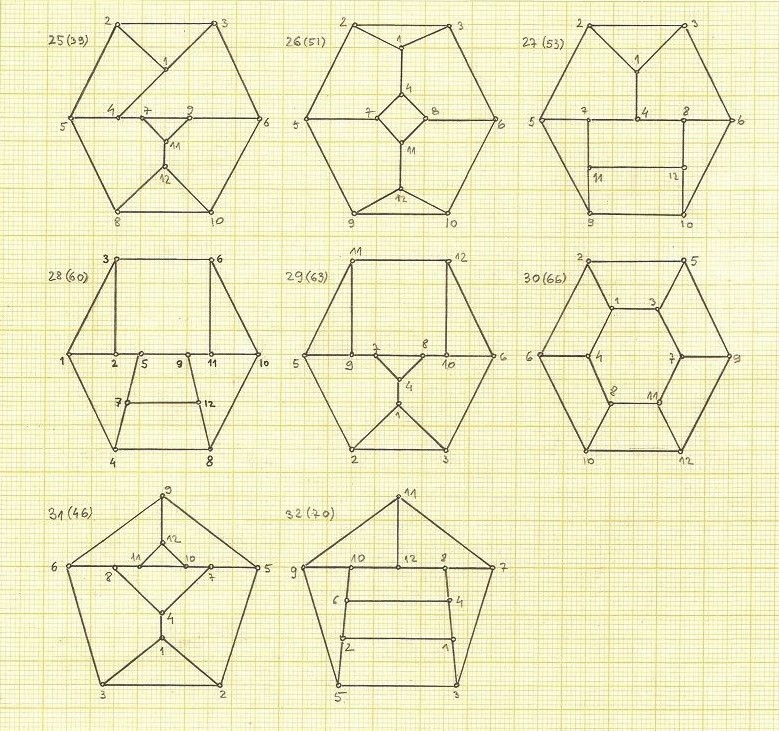 Appendix III
Here are presented 133 planar and regular graphs of the degree r=3 with number of vertices n=14 according to these rules:
-graph has to be visibly planar
-outer contour is a the longest cell in the graph
-symmetry 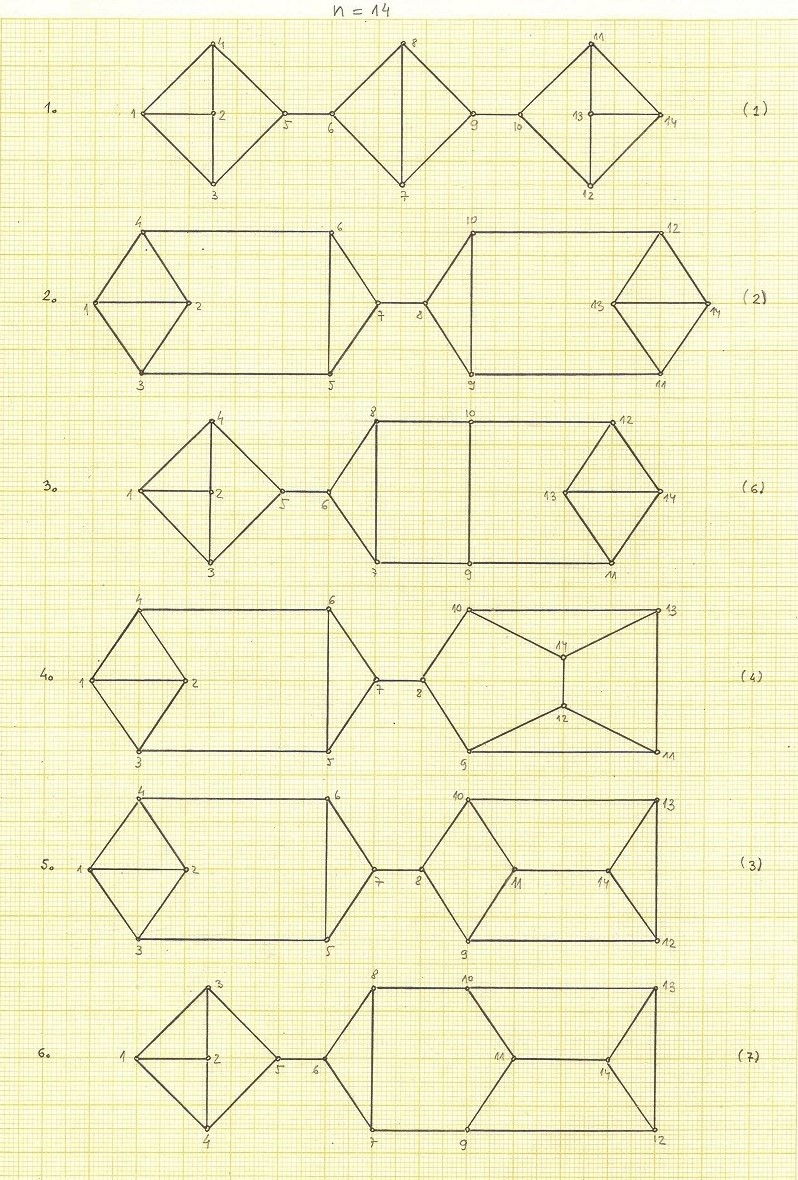 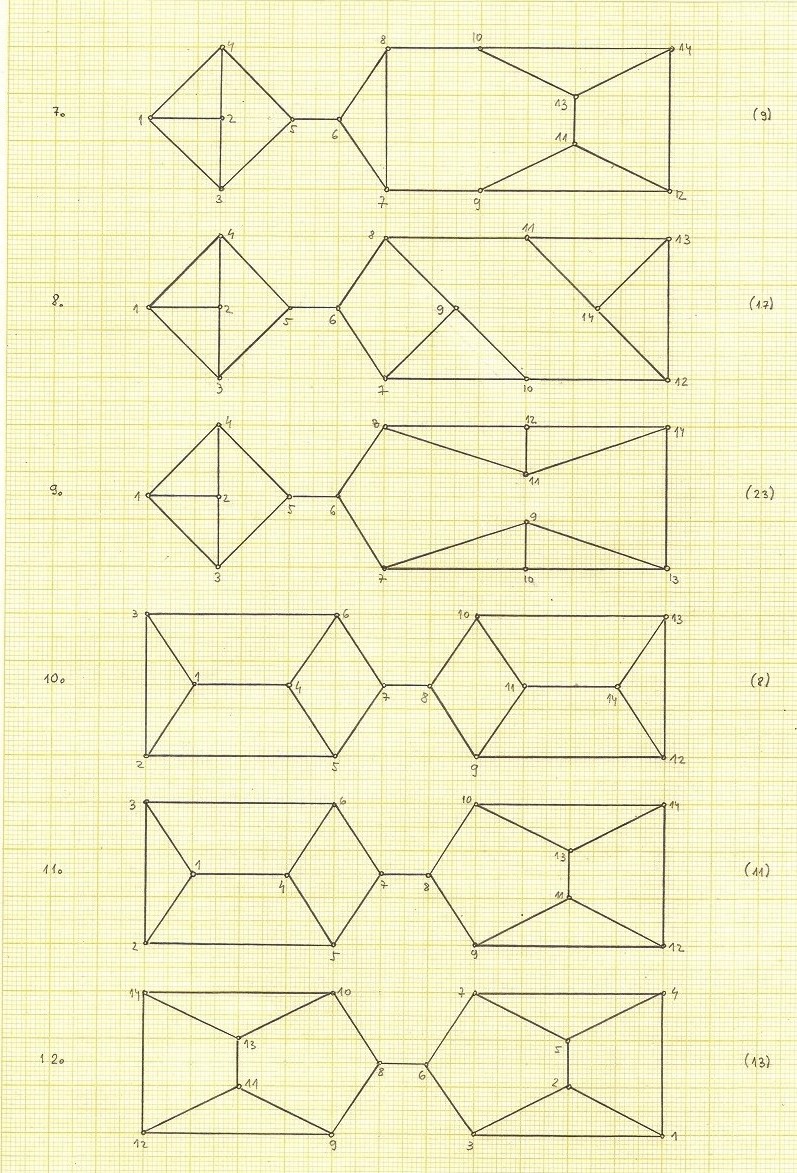 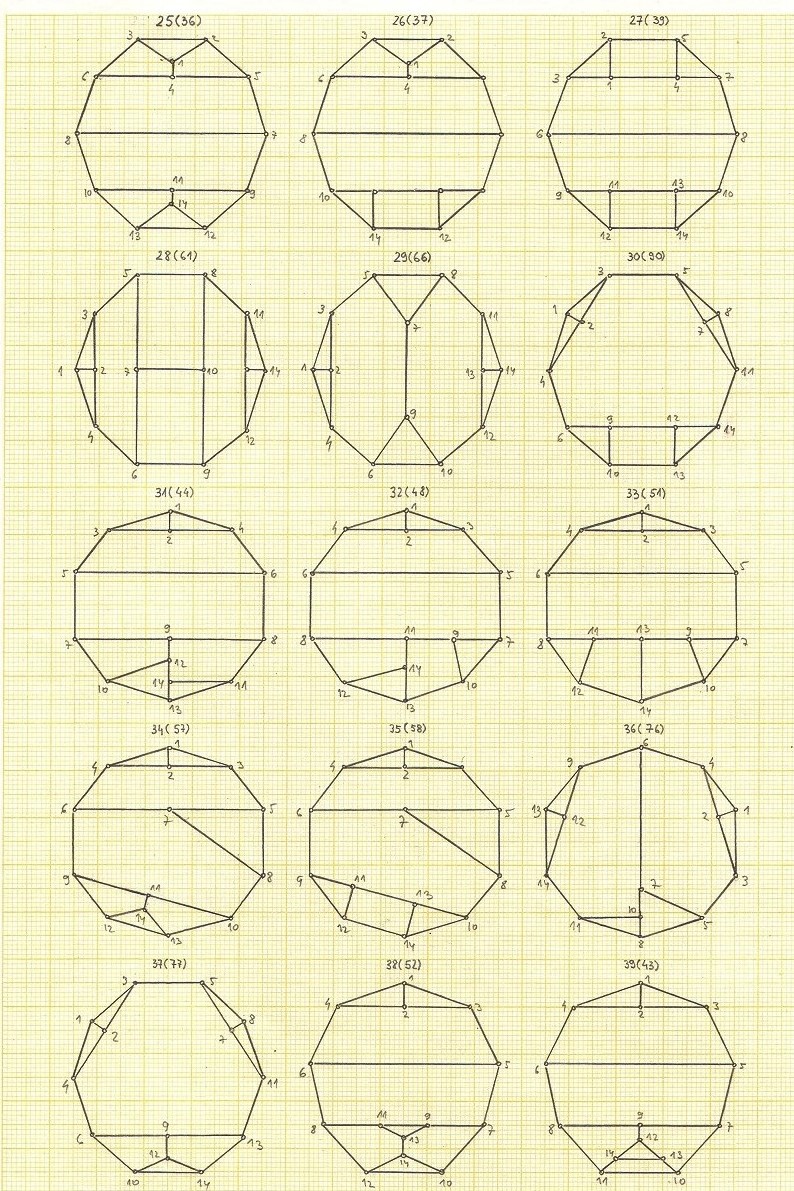 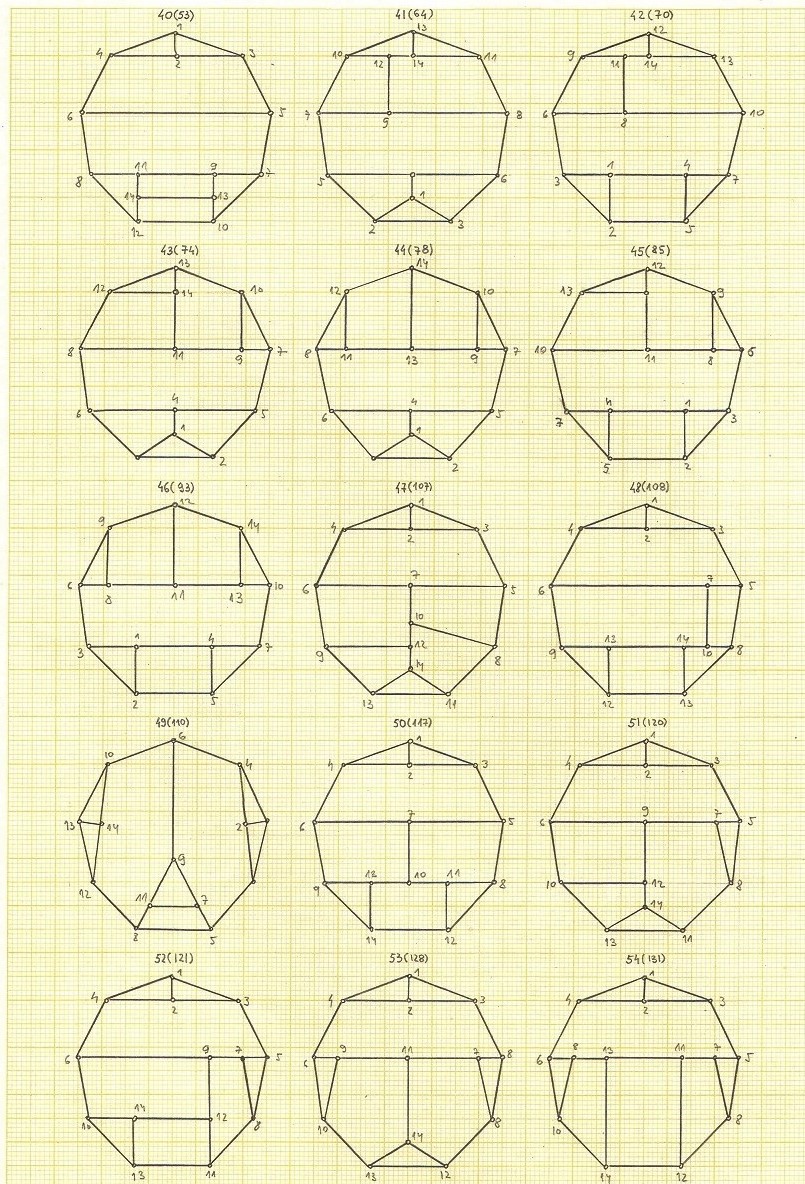 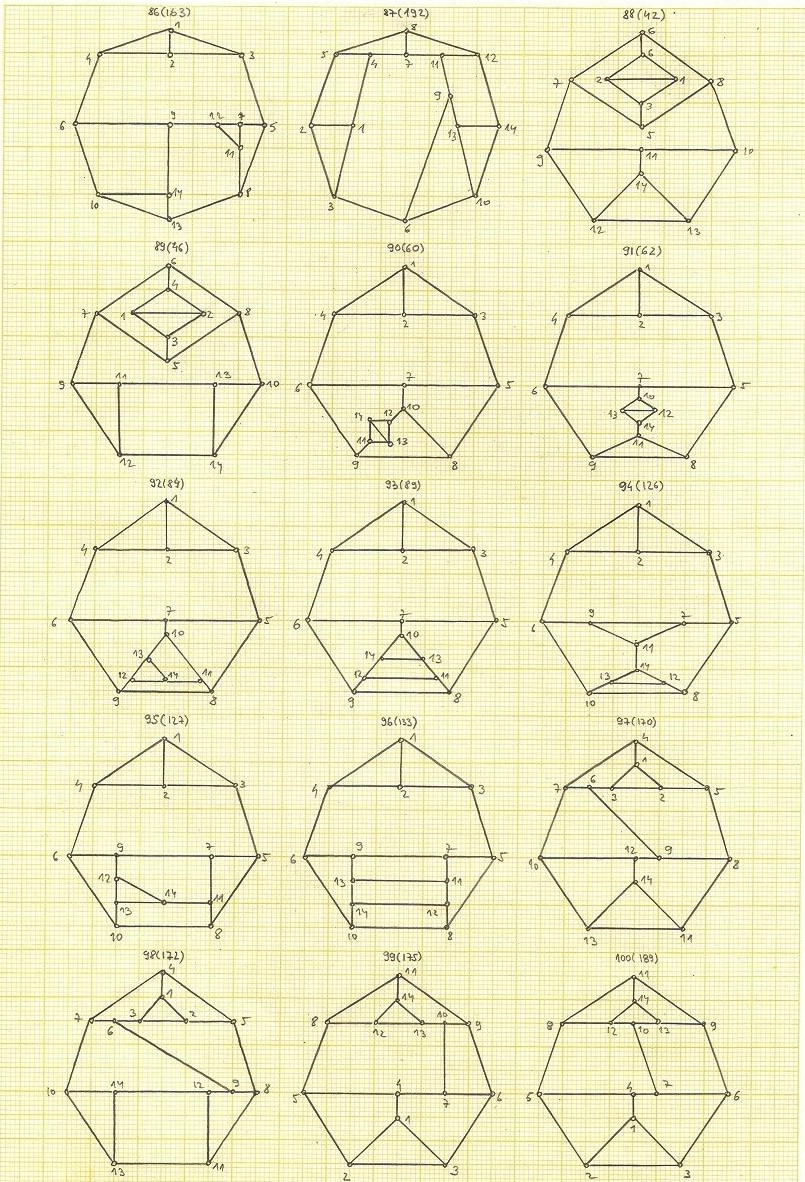 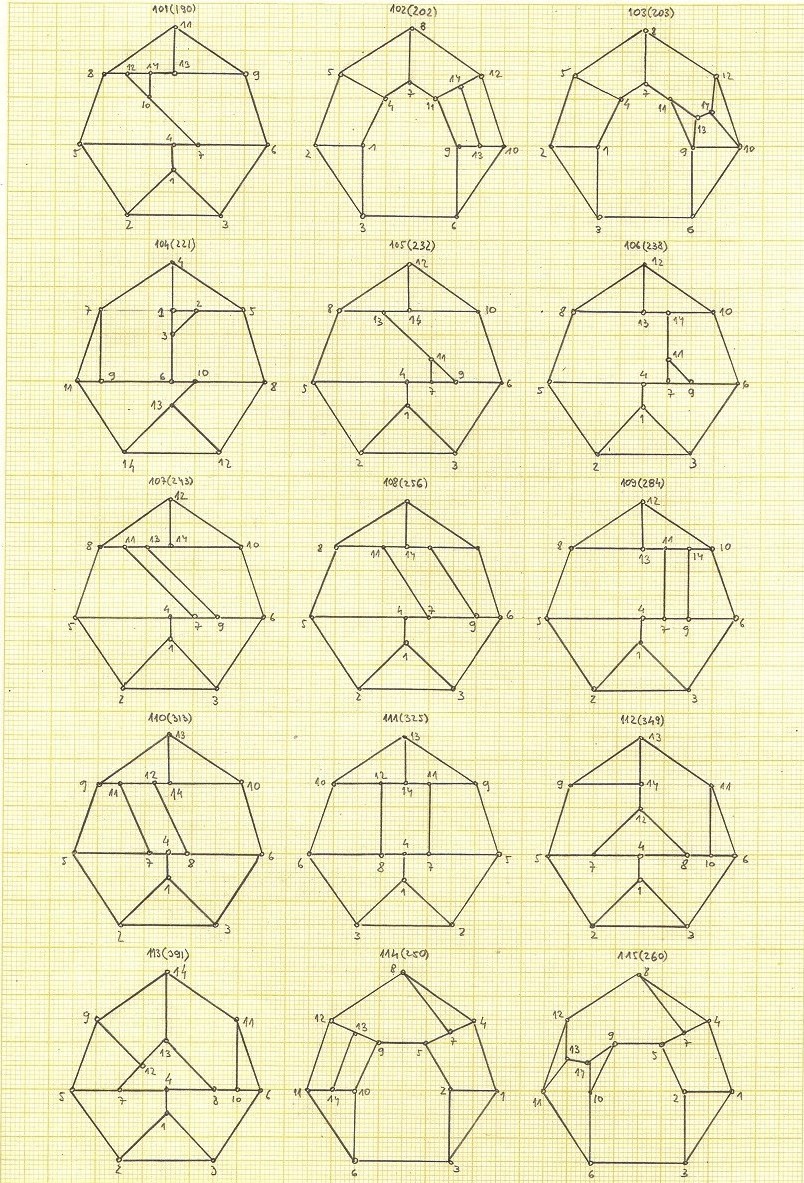 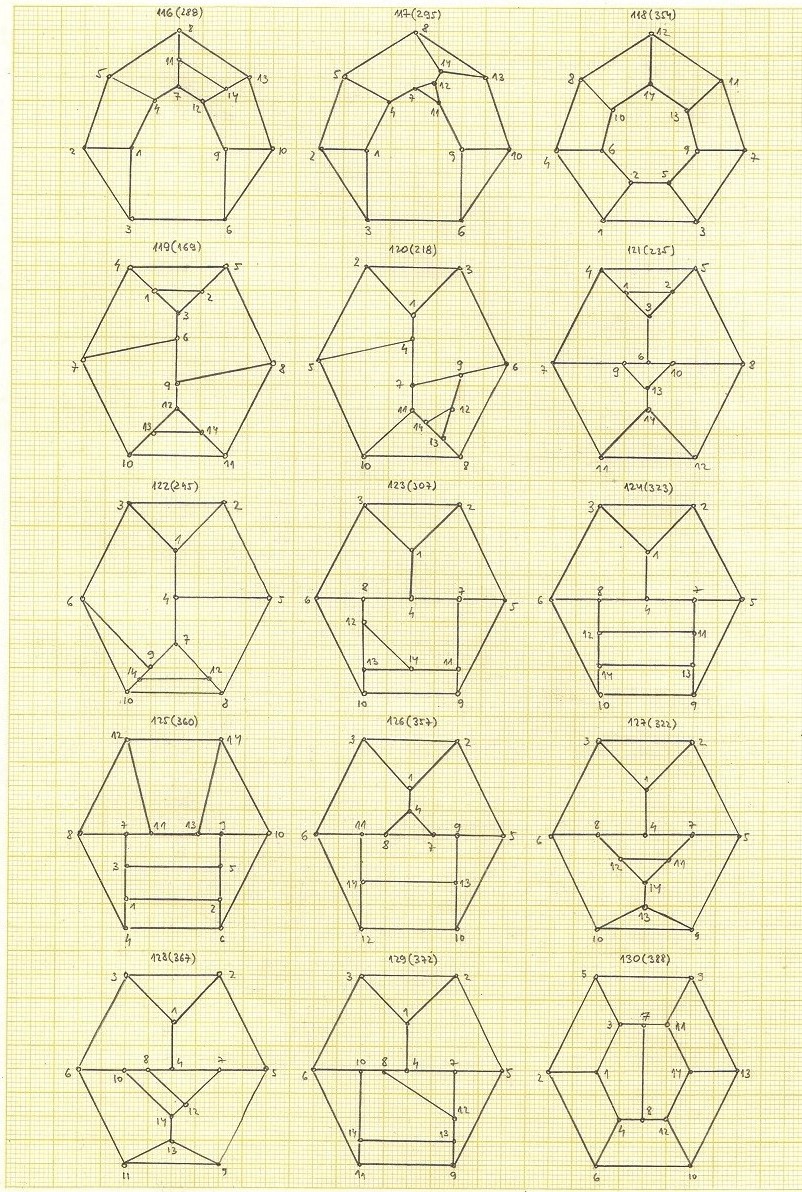 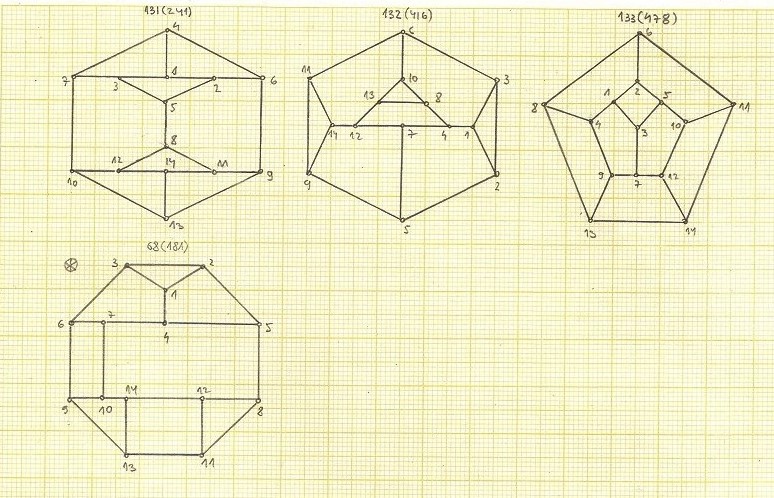 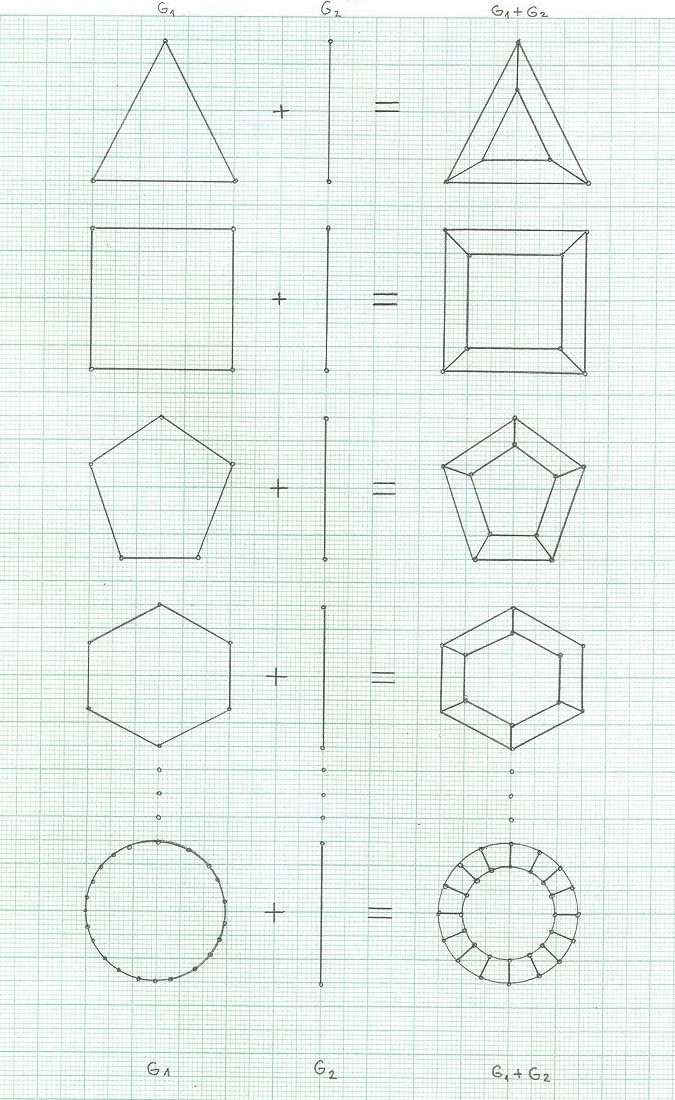 Appendix V
Here are presented 20 planar and regular graphs of the degree r=4 and number of vertices n=6, 8, 9, 10, 11
and 12, according to these rules:
-graph has to be visibly planar
-outer contour is a the longest cell in the graph
-symmetry 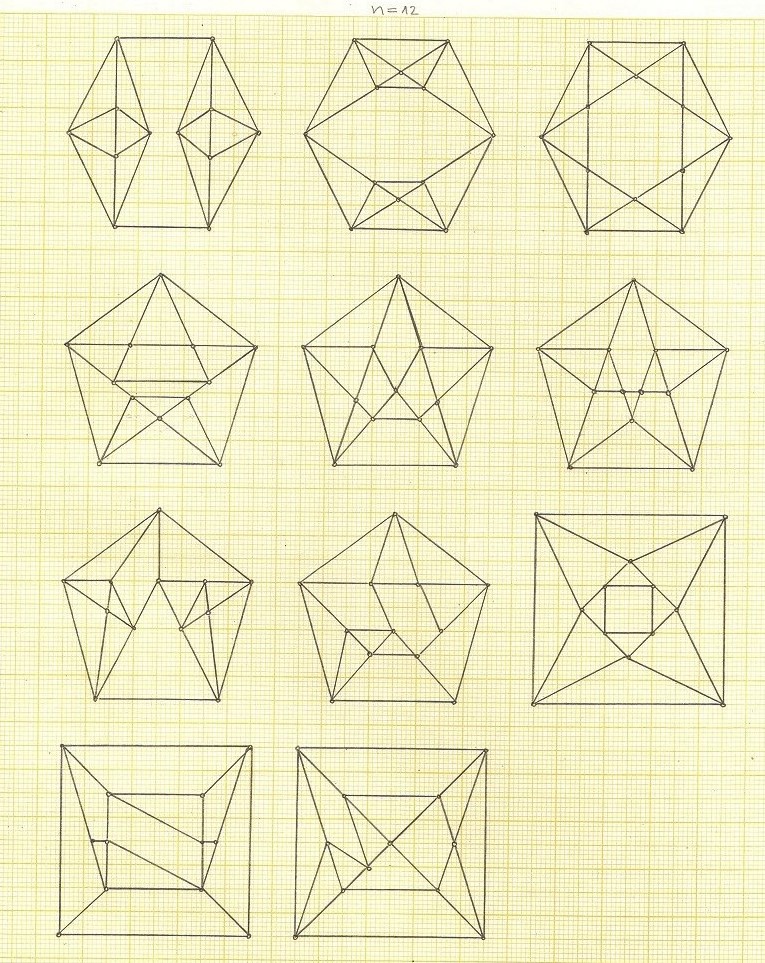 Appendix VI
Here are introduced some examples of generating planar and regular graphs of the degree r=5 and their graphic representations for the number of vertices n=12,16, 20, 22, 24 and 30, according to these rules:
-graph has to be visibly planar
-outer contour is a the longest cell in the graph
-symmetry

Appendix VII
Here are some examples of generating planar and regular graphs of the degrees r=2, 3, 4 and 5.
We could notice that graphs of various degrees represented in this way show certain visual similarities.

Appendix VIII
Here are presented some simple graphs r=0, 1, 2, 3 and corresponding spatial structures including those corresponding to the cubic graphs with number of vertices n=10. 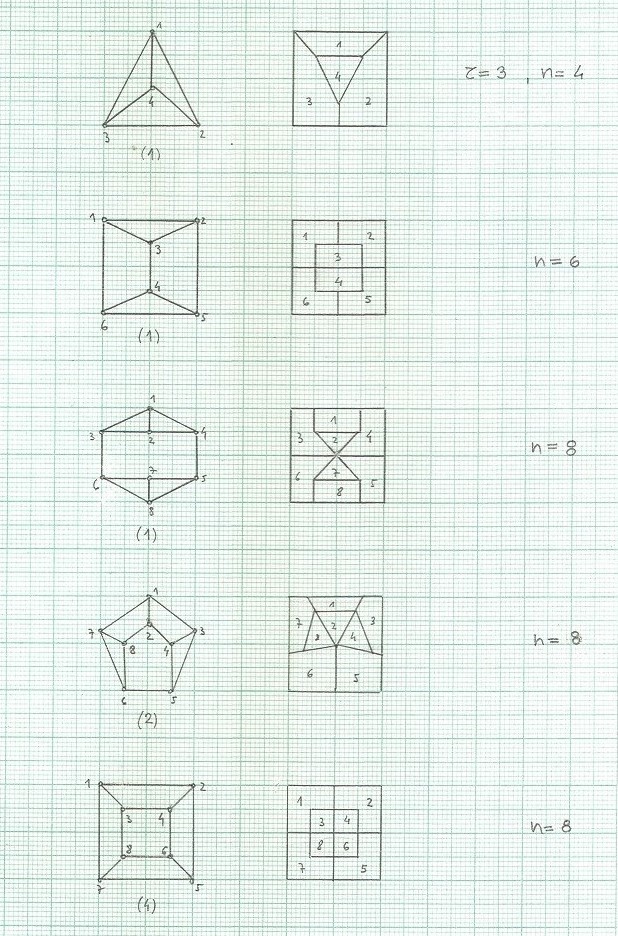