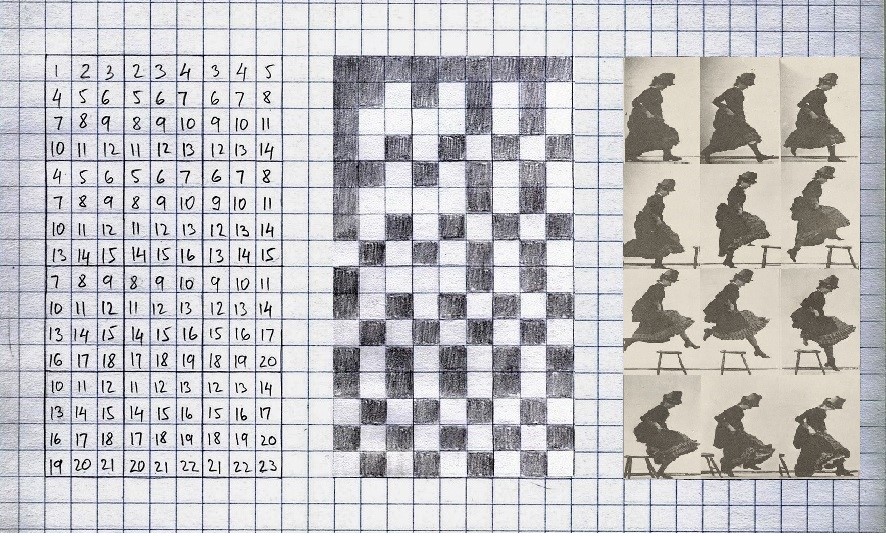 If we have a strand with 1, 2, 3, 4,..n positions it can be placed in these structures in various ways. As mentioned above, in one-element structure could be placed only one position at a time, while in two-element structure the number of different positions is two. And in three-element structure the number of positions is three(Fig.2). Now, in case of the simplest 2D structure 2×2 we could place four positions in two different orders. In one case, the first line will be 1 and 2 from left to right and in the second 3 and 4. In this case the value difference between horizontal neighbors remains the same(one), while the difference between vertical neighbors(1 – 3 and 2-4) is two. In the second case the first line would be 1 and 2, while the second is 2 and 3. Here the difference between vertical neighbors is one(1-2 and 2-3). In the third case the order in the first line is also 1 and 2, while in the second line it is 4 and 3, as if there is continuity like moving in the clockwise direction. Here the neighborhood difference in both horizontal lines is also one, but the vertical differences vary, one(between 2 and 3) and three(between 1 and 4) (Fig.3).

The next case is 3×2 matrix with several options(Fig.4). In one, the first line is 1,2,3 and the second line is 4,5,6. Here the horizontal neighborhoods are one, while all vertical are 3(1-4, 2-5, 3-6). There is another possibility: to have in the first line 1,2,3 and in the second 2,3,4. In this case the neighborhood differences, both horizontal and vertical, are the same – they are one. However, while in the first case each position appears only once within a given matrix, in the second case some positions appear twice (positions 2 and 3). 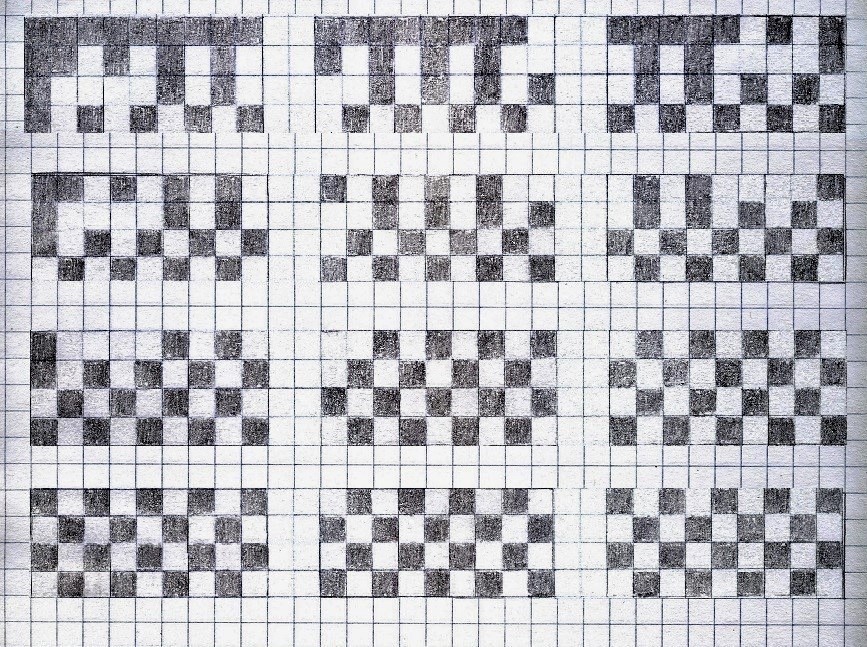 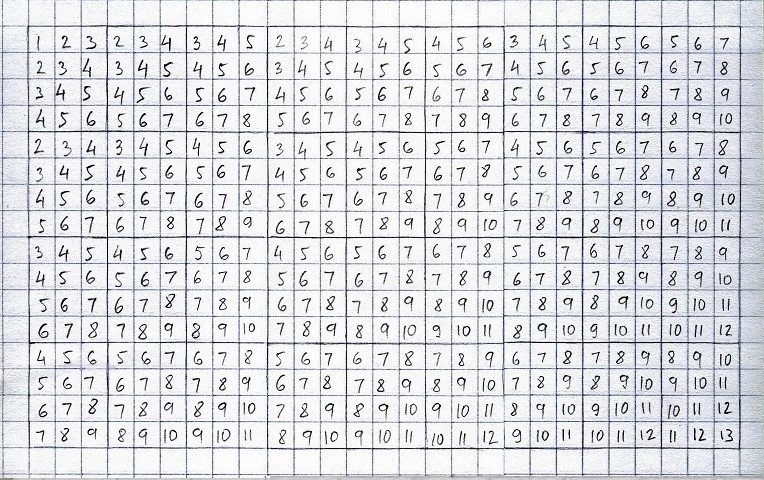 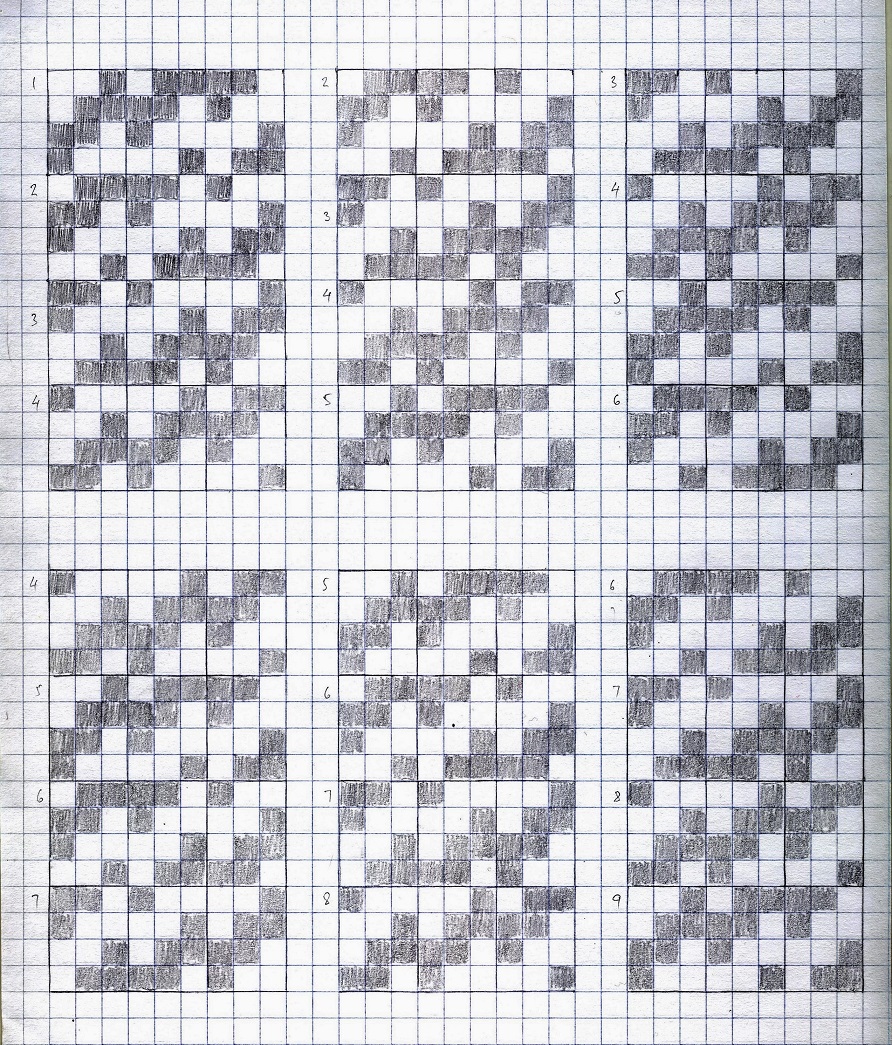 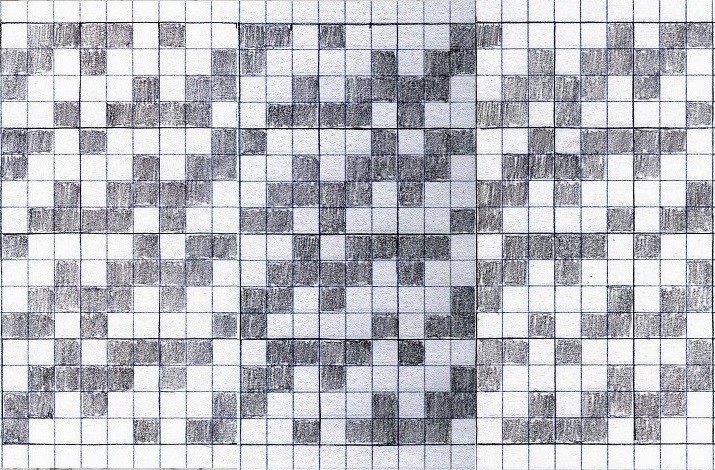 On the another example from the Human chromosome Chr22 we could notice how methods B and A could give very different interpretations of the same sequence.(Fig. 25) 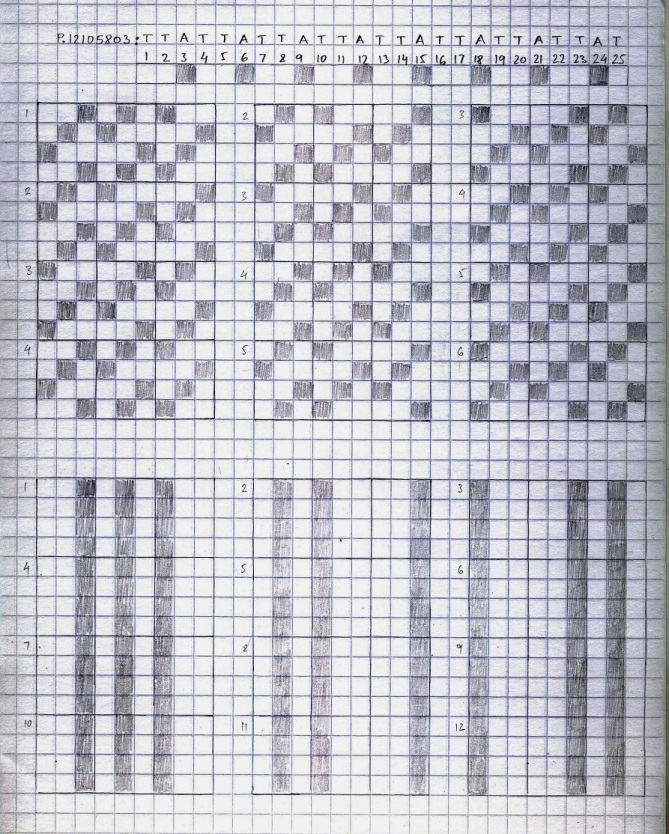 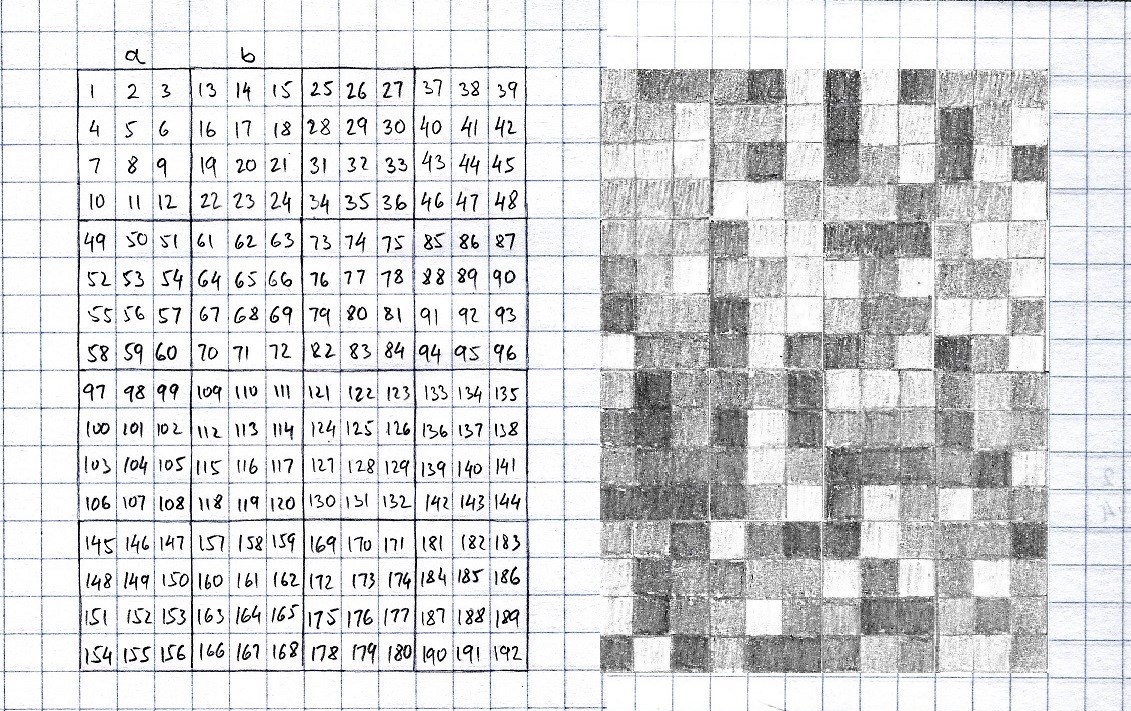 One may notice that in any of these images, basic or complex, there is no repetition of any position. Here each position appears only once, while in method A the same position appears only once in the same basic matrix, and in the method B the same position could appear up to three times in a single 3×4 matrix. Also, in method A1 a certain three-point stretch appears only once (123, 456, 789…), but here we could not find stretches like 234, 345 as we could in A and B. While the moving (linear) frame in cases A and A1 consists of 12 positions, in cases B it consists of three positions, four of them necessary to fill one 3×4 matrix. If method A1 is in some way the fastest (“fast forward”) of all three and method B is the slowest (“slow motion”), then A would be somewhere in the middle (“normal speed”)*.

It seems the phenomena we call “time” and “space” can be derived from “change”. Change is primarily a property of the observer and in our case it is the living matter as we know it. We might consider the possibility that the change within the living matter is determined by the processes of replication and transcription. Thus, these phenomena determine the scale of the observer (space) and pace of change (time).

It might be possible to find some parallels between these complex 2D structures with works of Étienne-JulesMarey and Eadweard Muybridge. While in Marey’s case there are layers of series of images overlapping each other within one frame (special unit), in Muybridge’s case images are spread in a series of spatial units. On Marey’s pictures we could see successive events recorded as single image (change recorded/observed in one special unit as a function of time), while in Muybridge’s case we see a series of pictures simultaneously (change recorded/observed in one time unit as a function of space). (Fig.29).

Fig. 29                                                                      However, if we see/interpret a Muybridge’s series as a single image(frame), then this would be one special unit on which we could see different time instances. The difference between these two is that in Marey’s case the images are layered on top of each other( overlapping), while on this composed Muybridge image, interpreted as a single picture, each particular scene is clearly separated from another. In a way these are two different interpretations of both “time” and “space”. This complex Muybridge composition very much resembles conversion of  linear strands into 2D images( starting with 3×4, 9×16, 36×64) as spatial distribution /organization of  units representing RNA/DNA( and at the same time notions of  space and time) presented in this paper(Fig.30, 31 and 32).

This could open a possibility for understanding “time”and “space”(change)  to be primarily  of  biological origin as an inherent properties of the organic matter(observer) that are projected on the environment(world). In other words, it might be that “time” and “space” do not originate from some cosmic event such as the Big-Bang singularity but from the emergence the first living molecules (proto-observers) at the “down of time”.

One base represents just the smallest time/space unit, a codon is already more complex but still linear unit, while 3×4 structure gives a fundamentally new way to interpret time and space. It itself is a single unit, but internally it consist of layers that could be interpreted as past, present and future. Now, when these units become building blocks of much larger structures, they in a way could be understood as much more complex time/space  units with many layers of possible  meanings and interpretations. One being that, in addition to time and space, these images represents memory as well. Without memory no observer could exist. Acquiring information about its environment , interpreting and remembering them, are two main properties of a living matter.

*) These are just few distinct ways to organize/present a linear structure as 2D image. In addition to those presented above, it might be interesting to mention additional one that is a bit “faster” version of the method B we could call B1(Fig. 33 and 34). Between two neighboring basic matrices in B1 there are three more in B. In other words,  B1 consists of each fourth basic matrix  generated by method B.

Examples of method A implemented on Chr22 sequences and a Muybridge series. 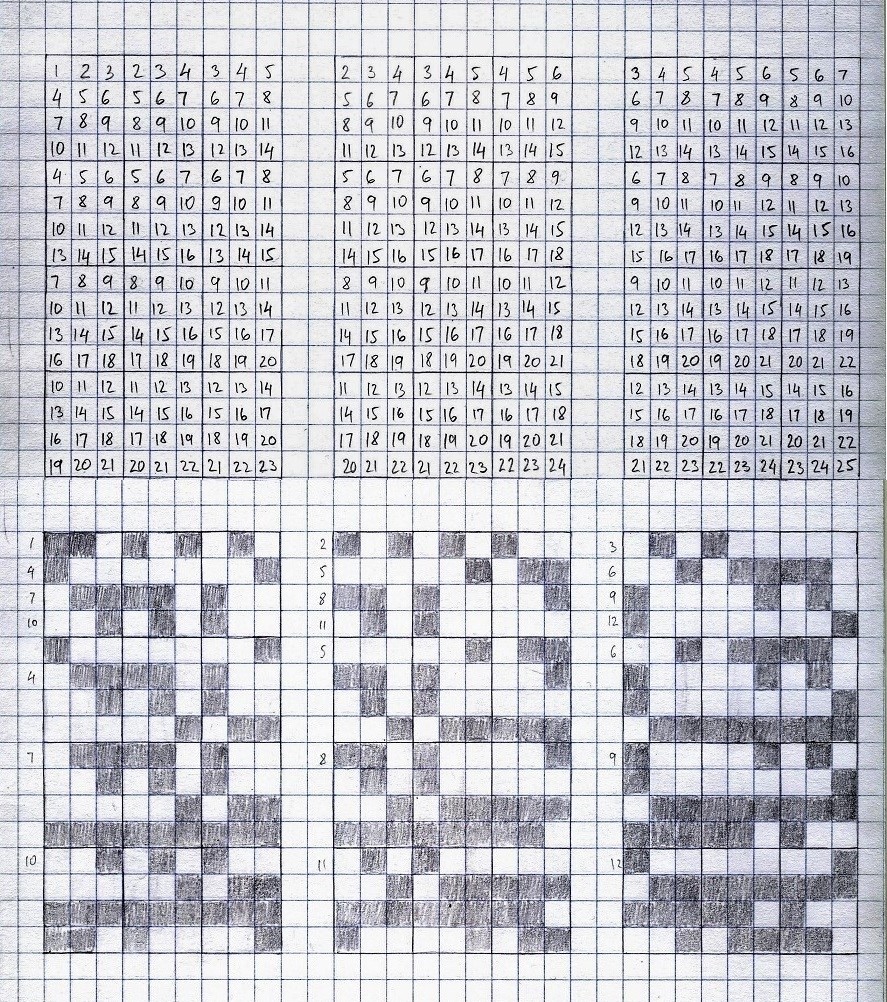 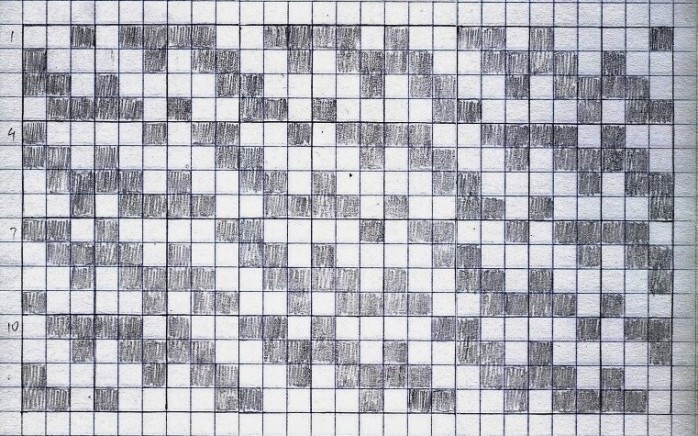 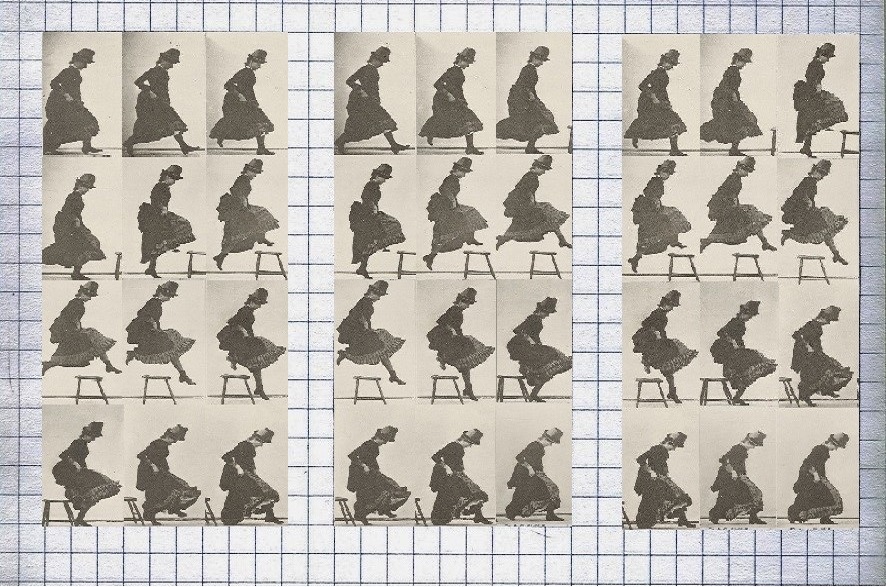 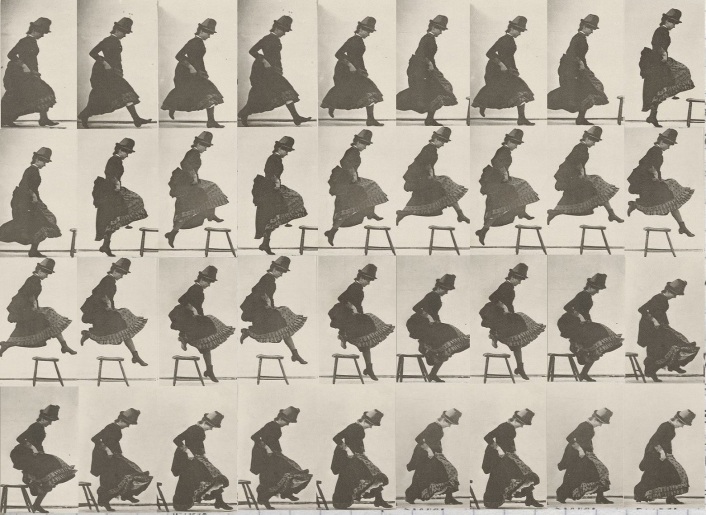 Examples of method B  implemented on Chr22 sequences and a Muybridge series. 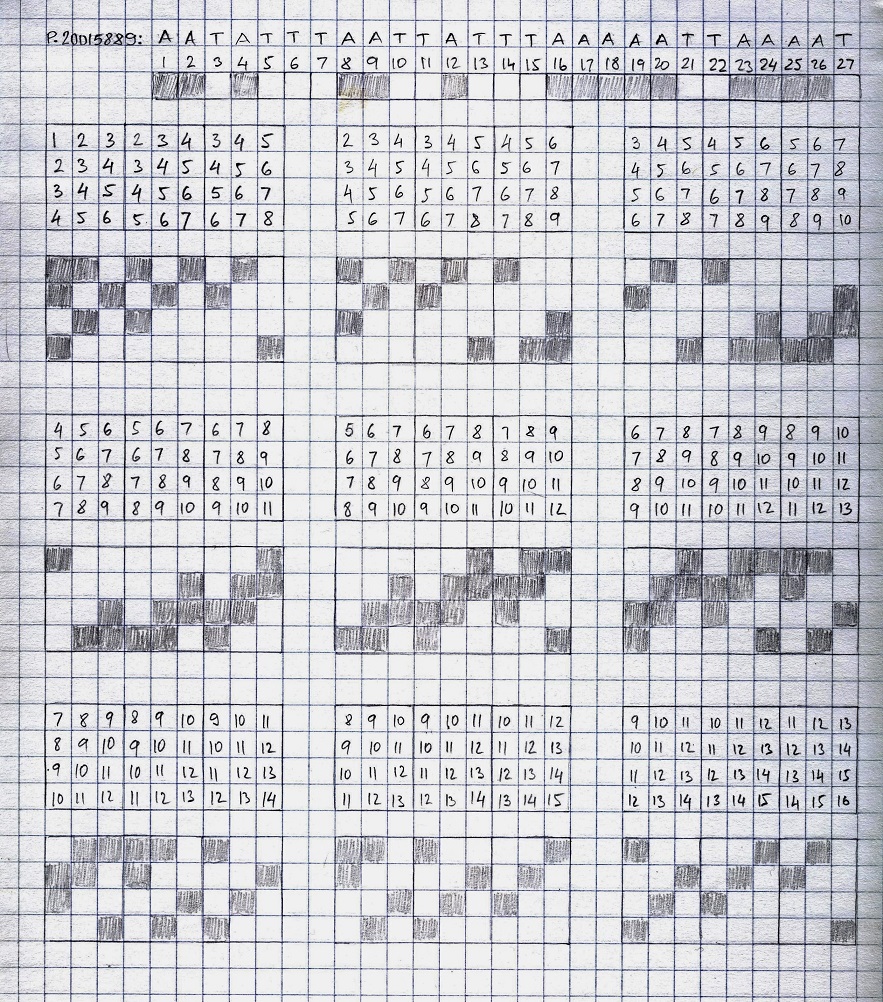 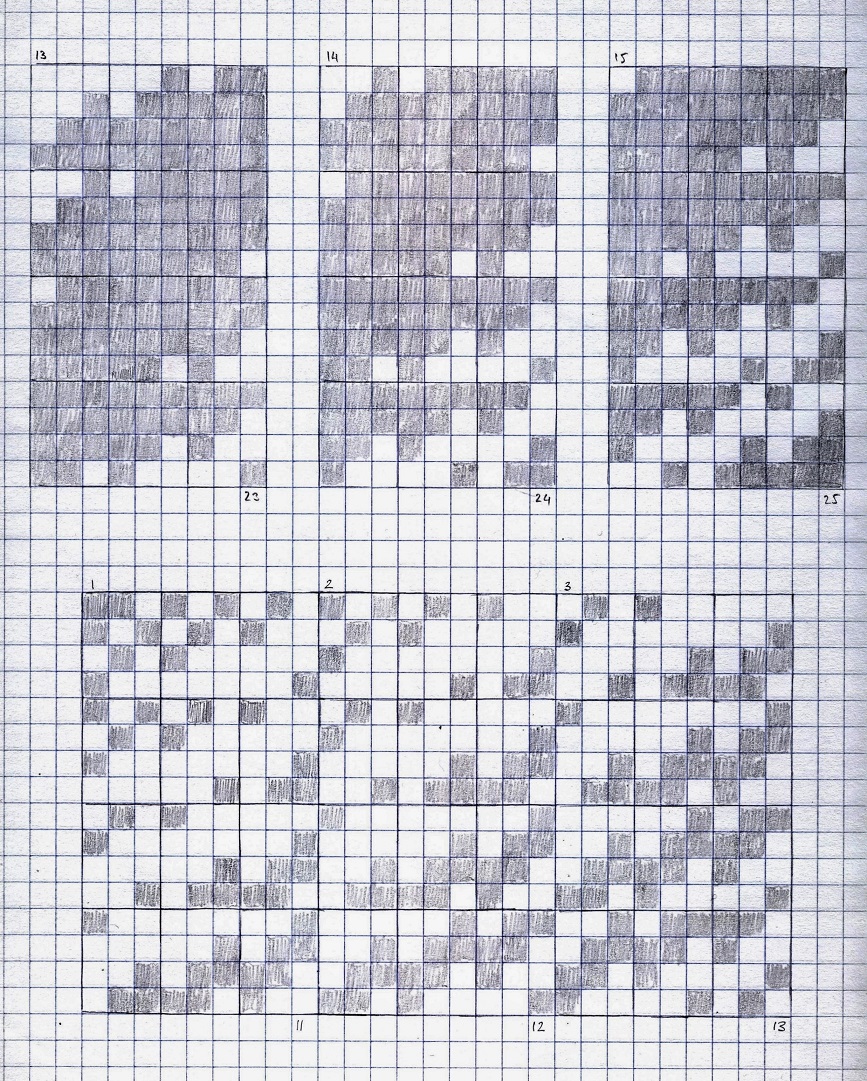 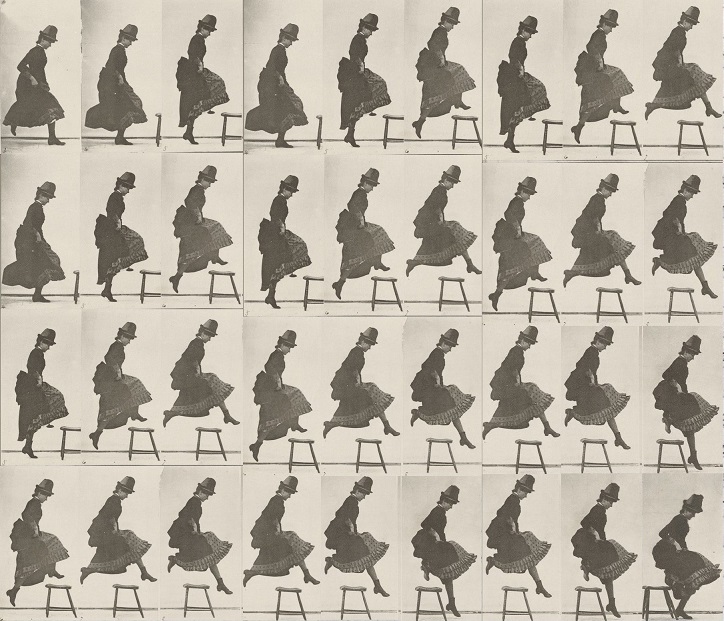