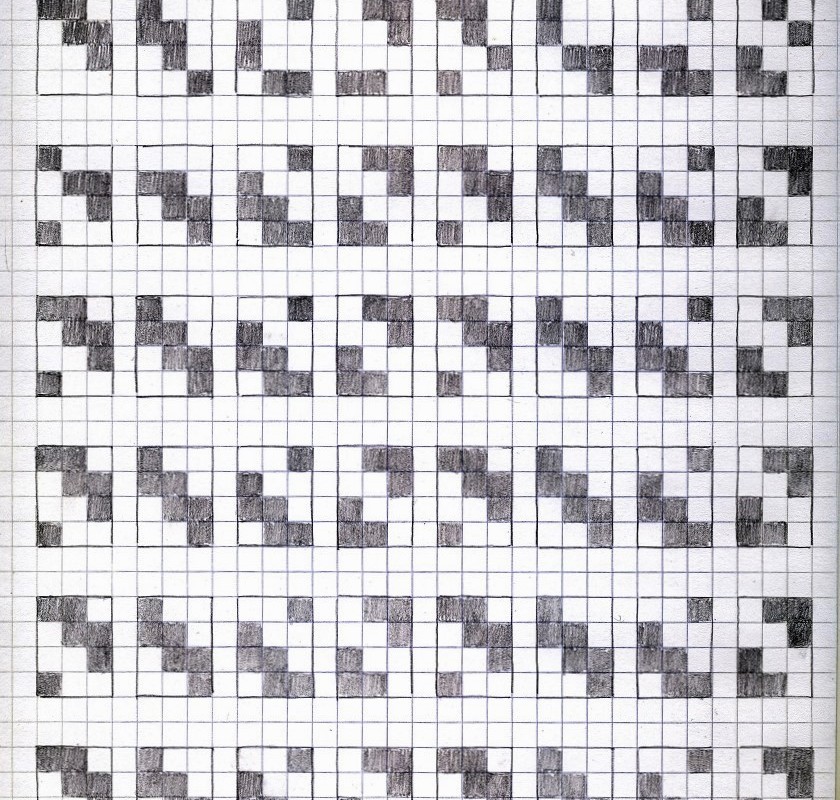 The emergence of life was the first machine learning.

-If we consider a possibility that the first molecule that had the properties of  living matter was some kind of proto-RNA, than this molecule could be interpreted as the earliest observer. This earliest observer was in a way a living precursor of the artificial observer (agent) as defined in the Artificial General Intelligence(AGI) today.

-Development of AGI should look not only in neurons of the brain but in strands of RNA/ DNA as well. The idea of AGI is to be “flexible, adaptive and robust (adaptability and learning)” In case of proto-RNA the “goal” was to learn about its environment in order to survive. AGI is being understood as a non-living observer which could learn about its environment but still do not have an autonomous “goal” to survive(“instinct of self-preservation”).

-The AGI notion named “Reinforcement Learning” could apply on proto-RNA as an natural agent in which the environment is interpreted as a discrete linear structure/strand consisting of bases/pixels that can be converted into 2D discrete image. This picture of environment is impressed on RNA and at the same time remembered. Those strands/agents with more accurate picture of the environment had a better chance to survive.

-The first knowledge by proto-RNA was most likely binary (hot-cold, dark-light) and perhaps could be found in in some DNA stretches  of the existing living organisms.

-Passive observer is one that only observes the environment (including other observers) and doesn’t interact with it, while an active observer interacts with the environment and changes it. When we consider AGI as an active observer, there are two possibilities. We could have one global AGI “brain” with different kinds of “sensors” on numerous locations, or we could have different artificial “brains”(fixed or moving)  each with multiple or one specific sensor(visual, audio, touch, radiation, etc.)

–In order to understand how proto-RNA might have perceived its environment we will need an algorithm that would convert four element linear structure of RNA/DNA  into  2D image. One such algorithm proposed here is based on the five discrete values of the gray-scale representing each of the basis of both RNA and DNA . Those values placed within the 3×4 matrices would form discrete  2D  images as shown in cases of  Mumps RNA and Human Chromosome Chr 22 in the Apendex below.

On these images we  could observe some formal properties of the RNA/DNA strands that are not visible in the linear alphabet  representation. These are various kinds of neighborhood relationships, states of high organization and entropy, patterns, repetitiveness of certain series of images,… 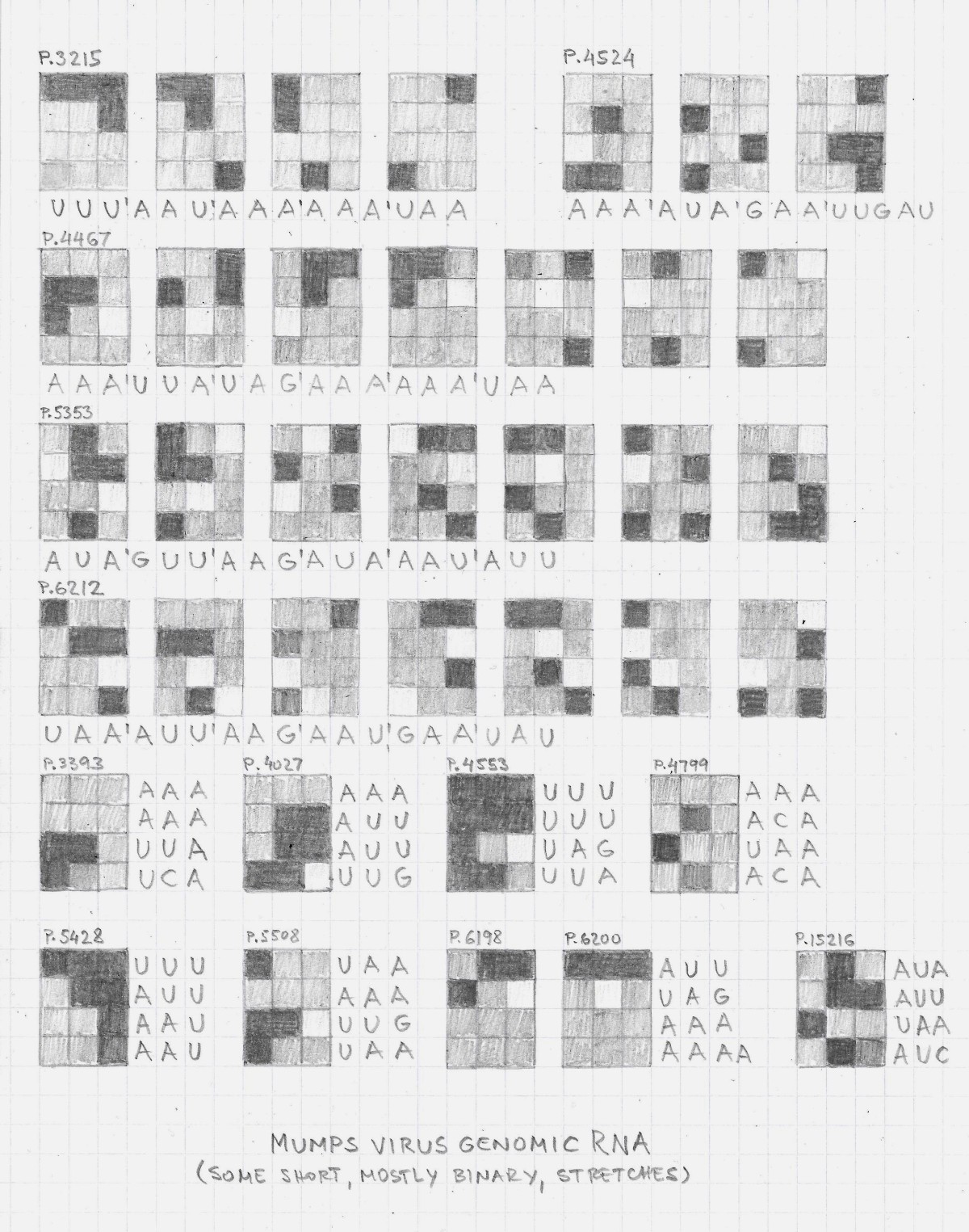 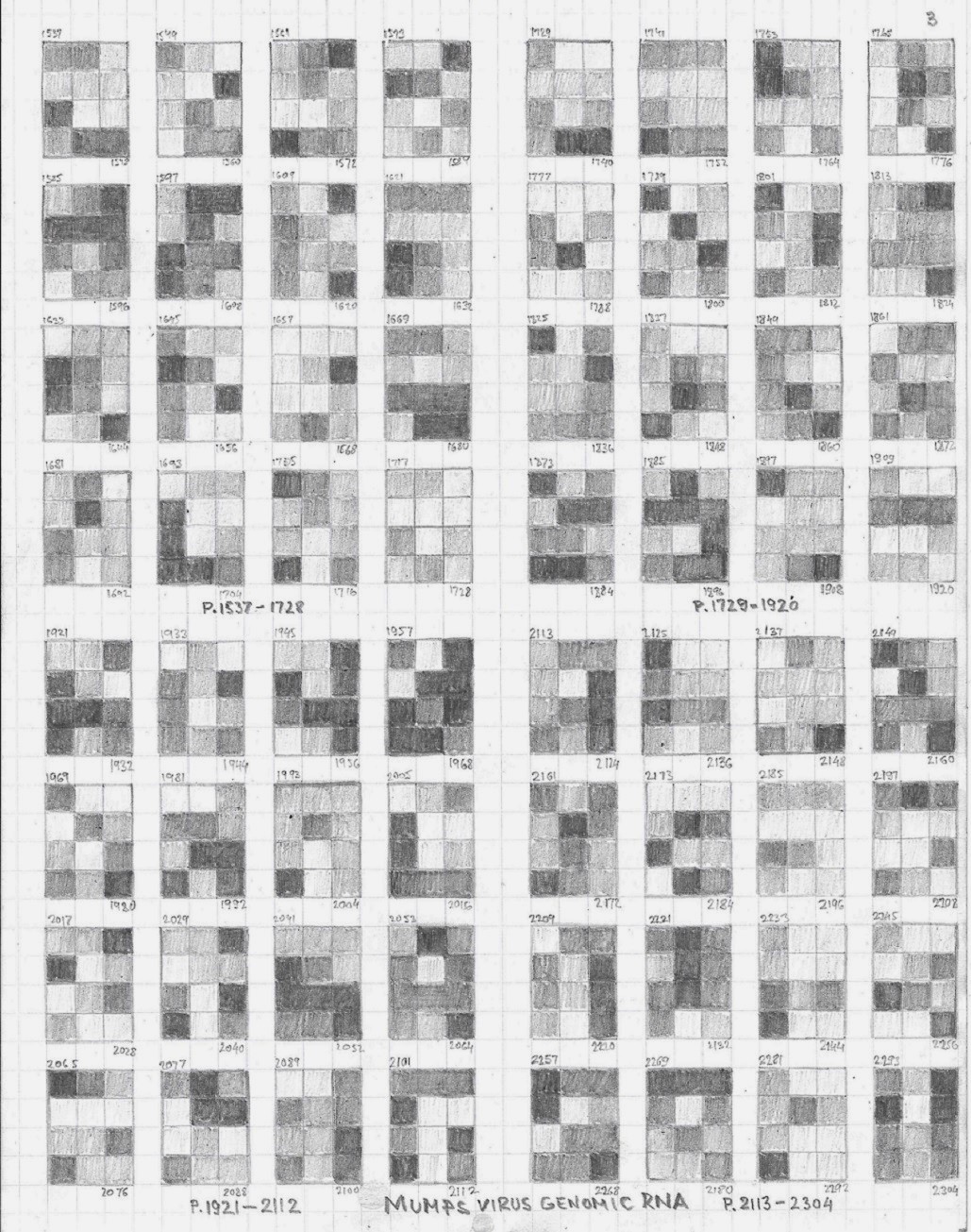 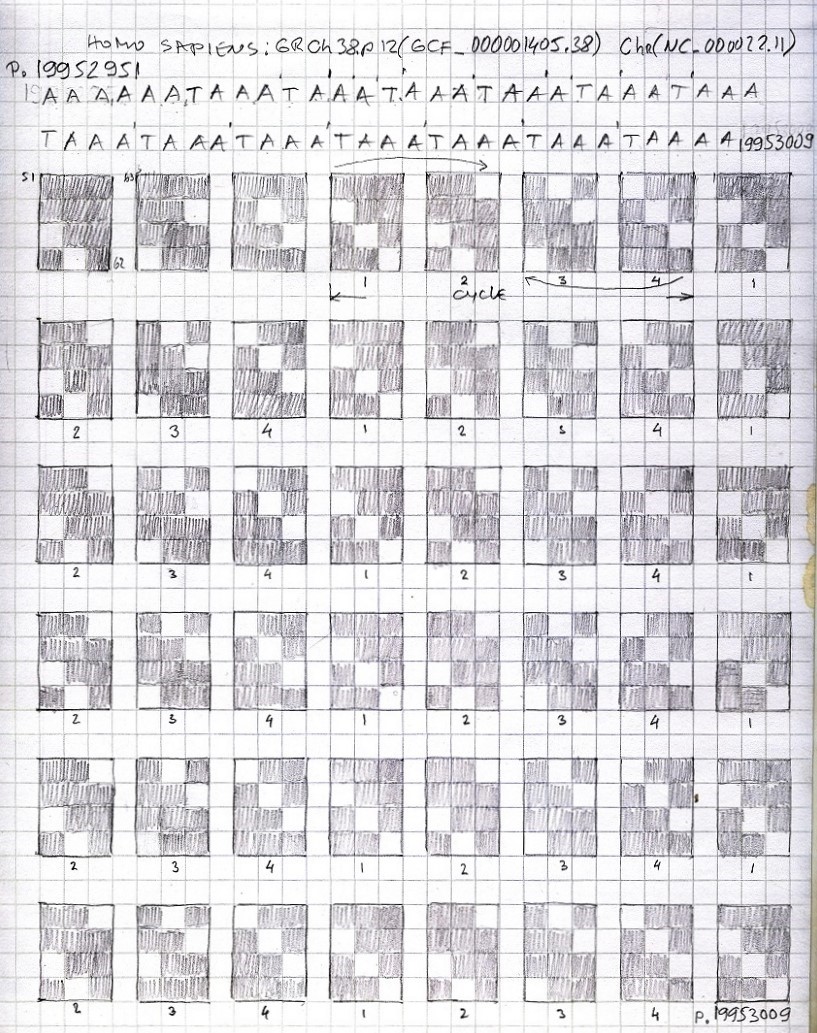